Advanced electron microscopy for understanding supported metal catalyst synthesis
Since the advent of industrial catalysis, many investigations focus on the development of new recipes or improvement of known recipes for catalyst synthesis with relatively little understanding of the physics and chemistry governing the processes involved. This is clearly illustrated in the development of catalysts for one of the most famous and important chemical processes in history, the Haber-Bosch process for the synthesis of ammonia from hydrogen and nitrogen. To develop a catalyst for this process, Haber tested hundreds of different catalysts and took the one with the best performance.

Although this is a possibility for the development of new catalysts, it is relatively slow, expensive and only yields limited understanding of the processes involved. Therefore this project aims to improve the understanding of supported metal catalyst synthesis in a liquid phase. It is already known that performance of such catalysts is dependent on many different factors, chief among which are metal nanoparticle size, spatial distribution and interaction of nanoparticles with the support.

Recent developments in Transmission Electron Microscopy (TEM), including tomography and liquid phase TEM allow for 3D imaging of nanostructures or imaging of dynamic processes at nanoscale in a liquid respectively. This allows for obtaining an unprecedented understanding of relevant processes, such as nanoparticle formation or movement occurring during the synthesis of supported metal catalysts.

The liquid phase TEM will therefore be used to monitor the formation of gold and platinum nanoparticles from precursor solutions on both model supports and industrially relevant supports, with a focus on silica and zeolite supports. Ex situ experiments are also performed to pinpoint possible influences of the electron beam and compare observed data to averages of larger volumes of catalyst. By studying these phenomena and how they are influenced by synthesis and support parameters, better control over catalyst manufacture and improved catalyst design can be achieved. 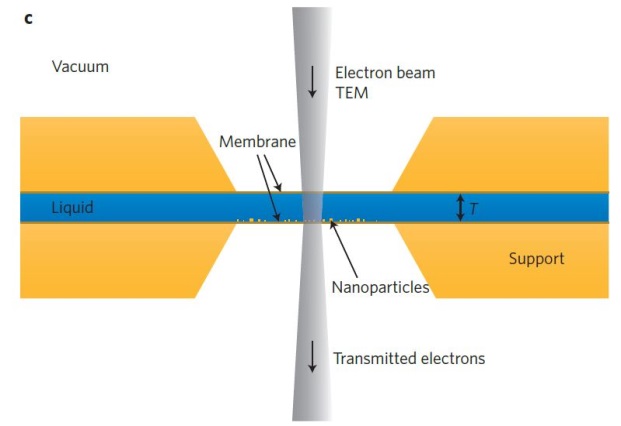 Figure 1: Schematic representation of liquid phase TEM, with a thin microchip containing the liquid, allowing the electron beam to travel through the sample [1]

2015-present
PhD candidate under supervision of Prof. dr. ir. Krijn de Jong in the group of Inorganic Chemistry and Catalysis, Utrecht University, the Netherlands. This project is sponsored by an ERC grant
“Advanced electron microscopy for improved understanding of supported metal catalyst synthesis.”