Converting CO2 into valuable chemicals and fuels is an important process to reduce our carbon footprint. In search for methods to reduce the greenhouse gas emissions, there is renewed interest in CO2 hydrogenation to methane. Hydrogen that is needed for this process can be obtained via electrolysis of water, with electricity from renewable sources. This means that besides mitigation of CO2 reduction, this process can be used to store energy in chemical bonds.[1] Nickel is widely investigated as a catalyst for this process due to its high activity and low cost.

There is not yet a clear consensus on the reaction mechanism of CO2 hydrogenation. Nonetheless, there are several indications that the mechanism depends on the nickel particle size.[2] Typical studies on particles size effects have been performed using oxidic supports such as SiO2 and Al2O3. However, due to the metal-support interactions with this type of support, it might be difficult to distinguish different effects. In this research, I use graphitic carbon as a support to deconvolute the influence of particle size, support and promoter effects for nickel-based catalysts during CO2 hydrogenation. Carbon is a relatively inert support and its surface chemistry can be tuned by the introduction of either acidic or basic surface groups. This can be of influence both on the synthesis, to obtain well-defined, highly distributed nanoparticles as shown in figure 1, and the catalytic performance[3].

I will use gas-phase transmission electron microscopy to study in­­-situ­ ­­the catalyst behavior under reaction atmosphere. This recently developed technique provides a unique opportunity to visualize at the nanoscale the effect of different gas atmospheres on catalysts and study for example the stability of our catalyst, which is a challenge in this process.[4]

Students who are interested in a project related to this research are very welcome to contact me. 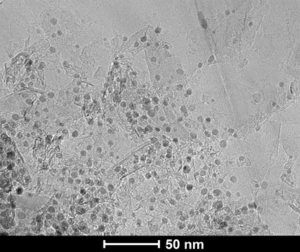 Figure 1: TEM image of nickel particles of ~6 nm on a graphitic carbon support

Born in Heemstede, The Netherlands