Bi-phasic liquid-liquid phase reactions have been employed in industrial processes for chemical production. Those reactions however suffer from inefficiency because of the mass transfer resistance avoiding intimate contact between reacting compounds and catalyst. In practice, a high agitation rate has to be employed to create large interface between corresponding phases allowing better substrate-substrate-catalyst interaction. Alternatively, it can be overcome by merging the respective non-soluble compounds to a single phase mixture in the presence of co-solvent or emulsifier. Nevertheless, the separation of either co-solvent or emulsifier from the product mixture often consumes lots of energy.

Pickering emulsion (PE) is sort of emulsion whereby the emulsifier is in the form of solids for instance silica, metal-oxide, carbon and zeolite nanoparticles. The ability of those particles at generating emulsion originates from their surface feature possessing hydrophylic and hydrophobic sites. PE also has a good stability in comparison to conventional soluble emulsifiers like common surfactants. Later on, the emulsion can be readily splitted to its individual phases by centrifugation. PE can also compartementelise homogeneous catalysts preventing them from leaching and carry-over by the reacting phase.

Despite its high potential, the exploration of PE in catalysis is relatively less investigated. In our research therefore, we investigate further the enhancement of acid-base catalysis by doing the reaction in the PE. 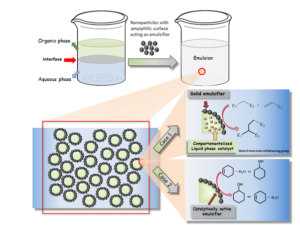