Carbon monoxide sets platinum atoms in motion
Catalysts are often made of expensive precious metals, which work most efficiently when very small particles of the metal are fixed to a less expensive carrier, such as magnetite (iron oxide). But the smaller the particles are, the more they have a tendency to move and join to form larger particles. Scientists at TU Wien (Vienna, Austria) and Utrecht University have identified how carbon monoxide plays a role in the mobility of these particles, but also the stability of clusters of several platinum atoms on a magnetite surface. From Utrecht University, PhD-candidate Jessi van der Hoeven playes a major role in the publication. The researchers announced their findings in a publication in Proceedings of the National Academy of Sciences on 25 July. 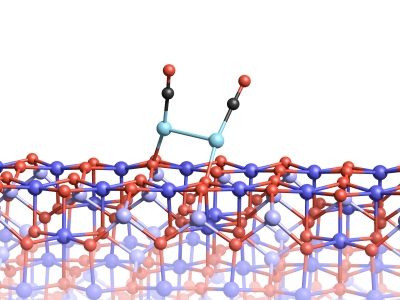 Two platinum atoms on the magnetite surface can bond, if they are attached to CO molecules.