In November 2016, the CatchBio consortium celebrated a decade of high-level research on catalytic biomass conversion. In an article in Agro & Chemie (March 2017), scientific director Bert Weckhuysen speaks about the consortium, its achievements and the future for catalysis of biomass in the Netherlands and abroad. 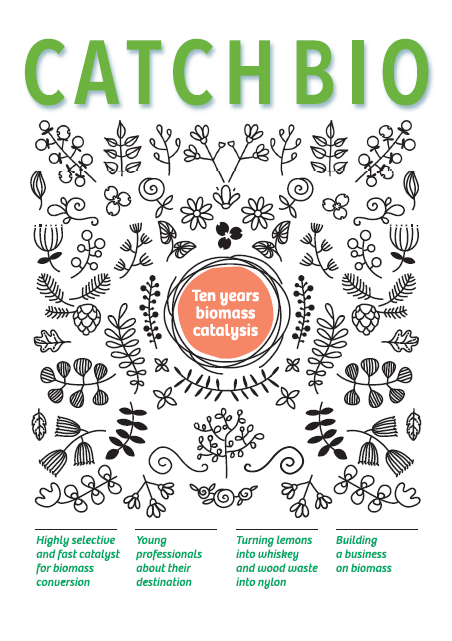 CatchBio is a Smartmix research program on Biomass Catalysis funded by the Dutch government and chemical industries (2007-2016; ~ 29 M€; Catalysis for the sustainable production of chemicals from Biomass; www.catchbio.com). It can look back on the past ten years with a respectable output of 200 publications, a strong network of academia and industry and newly emerged layers in catalysis of biomass.

Although the consortium is officially closed, there are separate research topics that will be continued within for instance the ARC CBBC.
Next to that, CatchBio educated a new generation of engineers and chemists, which will be of great value in the upcoming decades for both the Dutch economy and society.

CatchBio Magazine
With dedication to the ten years of biomass catalysis, CatchBio published the magazine “CatchBio”.
In the magazine Bert Weckhuysen explains how the consortium arise, what the initial focus of the program was and how the projects got refined and changed throughout the years. As scientific director and main initiator of this programme, Bert Weckhuysen was asked which aspect of the programme’s legacy he is most proud of. He states: “CatchBio has been a success due to and because of the brilliant people involved”.

Furthermore, there are interviews with project coordinators, including Emiel Hensen (TU/e), Erik Heeres (RUG), Sascha Kersten (UT) and Andrea Ramirez (UU).
Finally, with support from Utrecht University, the CatchBio program made it possible to appoint Pieter Bruijnincx as a tenure track assistant professor. Pieter Bruijnincx is currently Associate Professor Catalysis for Renewables at Utrecht University and obtained a VIDI research grant from the Netherlands Organization for Scientific Research.