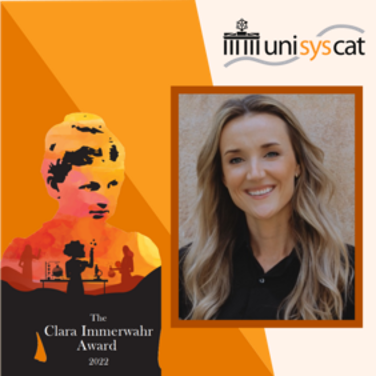 ICC-alumna Dr. Charlotte Vogt was awarded the 2022 Clara Immerwahr Award by UniSysCat, a cluster of excellence atfour universities and four research institutes in the Berlin/Potsdam area. The Clara Immerwahr Award “promotes equity and excellence in catalysis research, and promotes young female scientists at an early stage of their career”, and “is associated with a financial support of 15.000 Euro for a research stay at UniSysCat”. Charlotte graduated last year from the ICC group with the distinction Cum Laude, and received a Niels Stensen Fellowship for a Post-Doc at the Weizmann institute and the Hebrew University of Jerusalem, Israel. Since early 2021, she has been working as a principal investigator at the Technion in Haifa, Israel. Her PhD focused on fundamental studies of the concept of active sites in Catalysis, and used among others the Sabatier Reaction (CO2 hydrogenation to methane) and methane steam reforming to study catalysts at work; the work led to a large number of high profile publications. Charlotte was selected for the “Forbes 30 under 30” list earlier this year.